A number of home improvement shows now focus on where you stay when you’re away from home.

Several new travel shows are focusing less on the sights we can see and more on making temporary homes away from home. “The World’s Most Amazing Vacation Rentals,” on Netflix, showcases quirky and unusual spots around the globe, like this floating house on the Miami waterfront.

After more than a year of staring at the walls, Americans are booking vacations again. To help them pack, home-improvement television is offering a summer lineup of shows about where to go and where to stay.

TV, it seems, wants to get out of the house as much as the rest of us.

Netflix is premiering “The World’s Most Amazing Vacation Rentals” on June 18, showcasing quirky and unusual spots around the globe — a Mexico City apartment building shaped like a snake, an igloo in Finland, a lighthouse in Alaska. HGTV has renewed two of its vacation shows for second seasons, both airing in June — “Renovation Island,” about a couple remodeling a rundown resort in the Bahamas, and “Vacation House Rules,” about how to fix up your vacation rental to make it more profitable.

And when Magnolia Network launches digitally on July 15 as a joint venture with Discovery Inc., it will feature a lineup (available on Discovery+ and the Magnolia app) of shows aimed at rusty vacationers, giving us a refresher on what’s out there and what goes into making a vacation rental shine. Among the on-the-road offerings are “RE(Motel),” which profiles funky roadside motels; “Van Go,” a series about Brett Lewis, who turns people’s vans into tiny mobile homes; and “Inn the Works,” which follows a young innkeeper as she fixes up a retreat in Big Bear Lake, Calif. 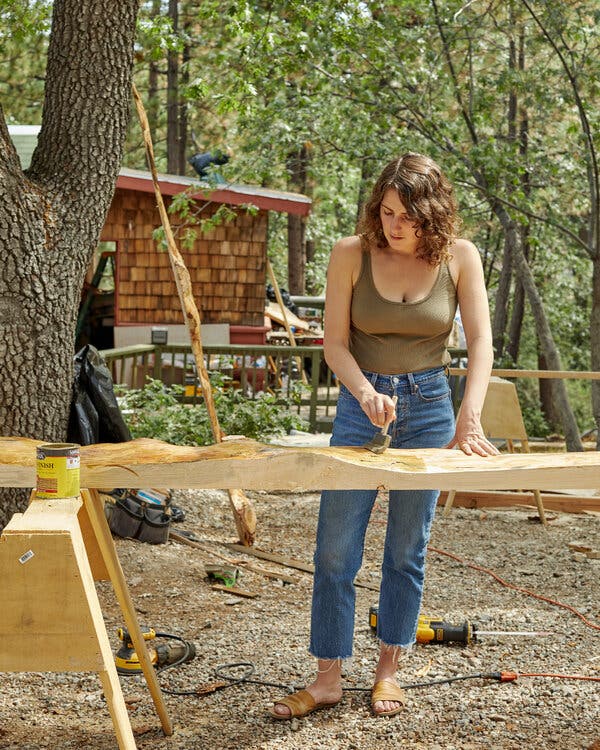 Lindsey Kurowski, the scrappy star of “Inn the Works” on Magnolia, staining wood as she and her siblings restore a resort in Big Bear Lake, Calif

But even as these shows whisk us to faraway places, the focus is less on the sights we can see and more on making temporary homes away from home. As we venture out as tourists again, they aim to help us experience travel through the places we book through Airbnb or other sites.

“It’s likely no accident that what resonated with us were stories of travel and possibility and wanderlust,” said Allison Page, the global president of Magnolia Network, about how so many travel shows made their way onto a network led by Chip and Joanna Gaines, the darlings of HGTV.

The timing for these shows is unexpectedly fortuitous. The network was supposed to launch last October, but was delayed by the pandemic, and its cable television debut, where it will replace the DIY Network, is still on hold until January 2022. Its lineup couldn’t be more on trend, offering viewers “this fantasy that feels attainable: that they could get in their car, shed this sedentary period of life and find something beautiful,” Ms. Page said.

In an email, Ms. Gaines, Magnolia’s chief creative officer, said, “I know for us, these shows have served as timely reminders of what makes life so beautiful: family, adventure, and possibility. When you hear these stories and watch how they unfold, you can’t help but want to go out and create or experience something special.”

Of all the shows, “The World’s Most Amazing Vacation Rentals” feels like the one made for this moment. The first episode was filmed in Bali in January 2020, set to the crowded, dynamic backdrop of a prepandemic Indonesia. But in the episodes that follow, mostly filmed after the pandemic began, the world feels strangely empty. Then again, who needs other people when you can stay in a 4,300-square-foot floating mansion in Miami, or a 6,000-square-foot lodge carved out of a cave in the Ozarks?

On an episode about treehouses, the hosts of “The World’s Most Amazing Vacation Rentals” stay in one on an alpaca farm in Atlanta.

“We were in these middle-of-nowhere places having the time of our lives,” said Ms. Franco, 28. And maybe that’s a good thing. Our collective anxiety about late-stage pandemic travel could lead to “a really interesting shift in the way we travel now,” she said. “We can dive into the experience, we can get more secluded, we can feel private and safe.”

Unlike Anthony Bourdain, who introduced a generation of viewers to rich cultures through the street food found in teeming markets and cramped cafes, this version of travel offers a vacation centered around where you stay, not what you do. Covid restrictions may be loosening, but many travelers are still looking for shelter that’s at a safe social distance.

“I think a well-designed vacation rental can offer people a lot of comfort to know that something can be safe, if they are fearing Covid,” said Ms. Batoon, 30, a designer whose YouTube videos frequently focus on do-it-yourself home-improvement projects.

While “The World’s Most Amazing Vacation Rentals” is all about where to stay, shows like “Inn the Works” focus on the elbow grease involved in turning hotels into places you would actually want to visit. “Inn the Works” chronicles how Lindsey Kurowski enlists her three siblings to help her restore a historic lodge with 13 cabins near the Bear Mountain ski resort in Southern California.

In the first episode, as she and her siblings discuss how to renovate the lodge, Ms. Kurowski approaches two guests as they arrive, asking for their understanding about the state of renovation. “In return, I will give you guys a discount,” she tells them. After they shrug off the construction noise and an extension cord that will run out of their room, she hugs them (the first episode was filmed pre-Covid), saying, “I’m so lucky!”

The rest of the series was filmed during the pandemic, as Ms. Kurowski continued to rent cabins while a crew filmed the renovations of the four-acre property. “Maybe that isn’t my smartest idea,” Ms. Kurowski, 33, told me. “It’s not ideal to stay at a hotel that is being renovated.”

Despite the mess and the pandemic, Ms. Kurowski said the hotel “has been insanely busy” over the last year, which she attributes to the stand-alone cabins that make for an ideal socially distanced destination. She has since bought a second inn, a motel in the Berkshires in Massachusetts, near where she grew up.

Vacationers are looking for something different in the places they stay, and it’s not just the pandemic that is driving the shift. Instagram and home-improvement television have managed to turn even our getaways into something demanding the photogenic quality of a big reveal. Ms. Kurowski, who also produces events for corporations, sees the value of “some styling tricks” and a well-staged photo.

“People are changing the way they travel, the way they book hotels, everything is different,” she said. “People want bang for their buck, they want the most amenities they can get. They want a personalized experience.”